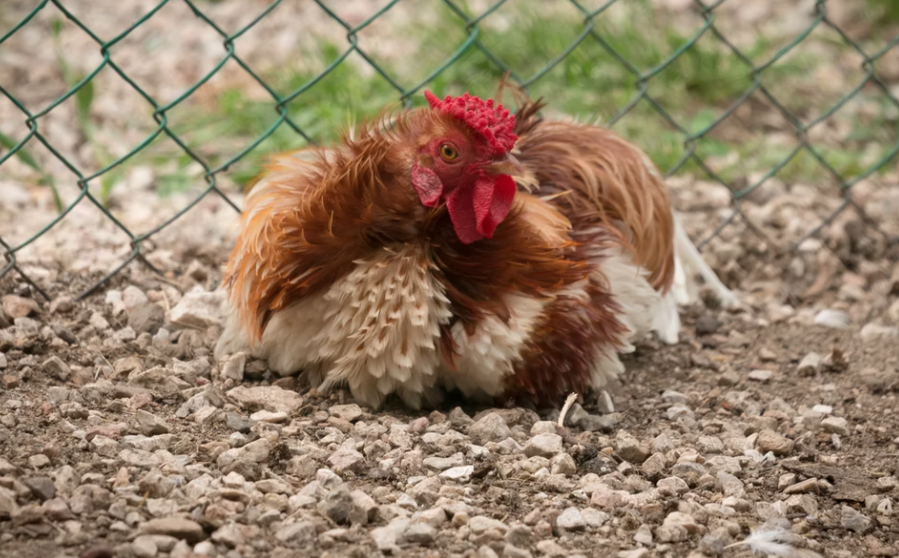 If you discover that your chicken is laying down all of the time, it could not be something big to worry about in most cases. It is perfectly normal for some chickens to lay around most of the day. However, it does not mean that you should not check them occasionally for any sign of illness.

If your bird has gone from being active to lying down most of the time abruptly, this could indicate that something is bothering them. On the other hand, some chickens are lazy and will spend most of their time lying down.

In this article, we will discuss some of the things that could indicate your chickens are unwell. If your chicken is lying down more often, you can check a few things to establish the cause. Keep reading to learn more.

Take a Look at the Chicken’s Comb

One of the first things that you must check when your hen is lying down is its comb. A chicken’s comb is a good indicator of their general health. Typically, the combs of most chicken breeds are bright red when they are healthy. If the comb changes its color to other colors such as pink, pale red, black, or purple, it could indicate something wrong with your chicken.

If your chicken is dehydrated, its comb will flop over instead of being erect. You must provide her with plenty of freshwaters. A pale comb can be an indicator of heat exhaustion if the climate is warm. You can help your chicken by filling a shallow container with cold water and having it stand inside.

A pale comb can also be a sign of anemia in chickens. Anemia can be a result of parasite infestation such as mites, worms, and lice. You can check for external parasites like lice and mites by parting the chicken’s feathers in several places and looking carefully at their skin. Other signs of external parasites include loss of appetite, dull feathers, and bald spots.

Check their Nostrils and Eyes

Generally, chickens are not good at clearing their nostrils or eyes if they experience any discharge. Therefore, these are some of the best places to start. If your chickens have excess fluid, swollen eyes, or unclear nostrils and eyes, then you will have to take a close look to find out the issue.

If your chickens are lying down most of the time, you can check their vent to establish any problem. Chickens usually have one opening where they can poop and pee at the same time. It is also the same opening they use when laying eggs.

Egg binding in chickens can happen if an egg gets stuck in its oviduct. This is more common among young layers. An egg-bound chicken is usually lethargic with its tail down and will appear to be shuffling or straining. Other signs of egg binding in hens include a pale comb, lack of appetite, and loose stool, or even wholly none at all.

It is a severe condition that must be solved as soon as possible. The hen is more likely to die if she does not pass the egg in about two or three days. If you suspect it, you should carefully handle your hen, so the egg does not break inside. It can result in a fatal infection if it breaks inside.

Listen to the Chicken’s Breathing

You can feel the breathing of your chicken by holding her and putting your hands on either side. Listen carefully if her breathing sounds gurgly. Making a choking motion or gasping can indicate gape worms that usually reside in the chicken’s trachea. Other symptoms include shaking their head and coughing.

It is sometimes possible to see red worms attached to the chicken’s trachea if you check their throat. If you suspect gape worms in your chickens, you should worm them with an effective wormer.

The chicken’s breath can also sound gurgly if there is something stuck in the throat. You can carefully open the beak and check her throat. If the chicken has foamy eyes, raspy breathing, runny nostrils, and sneezing, then she could be having a respiratory issue. On some occasions, it can be accompanied by loss of appetite and lethargy. It is advisable to isolate the chicken from the rest of the flock until when the symptoms disappear.

The crop is a large pouch where chickens store food. It is situated at the front of the chest. When a chicken eats throughout the day, the food is accumulated in the crop. The chicken’s digestive system will get to work overnight, and food will move from the crop to the gizzard, where it will be digested.

In some incidents, the chicken’s crop can be blocked. Backyard chickens can suffer from a couple of conditions known as sour crop and impacted crop. An impacted crop happens when the crop is blocked due to stringy or large foods that can not be passed to the stomach of the chicken.

On the other hand, the sour crop is more severe and complicated. It happens when food is blocked on its way to the gizzard. As a result, the food ferments because of bacteria captivating in the chicken’s crop.

Both sour crop and an impacted crop are serious and can cause your chicken to be sick. As a result, the chicken will act lethargic and start lying around. In such occurrences, you must act as soon as possible to help your chicken by seeking assistance from a veterinarian.

Look at the Chicken’s Dropping for Anything Abnormal

However strange or difficult it may appear, it is important to check the poop of your chickens whenever you suspect or think that they are unwell. Generally, the poop of chickens usually varies in consistency and color. When you discover something abnormal about it, it will mean that your chicken is not well.

Some things to look for include signs of mucus and blood, diarrhea, a foul smell that is worse than the normal one, and odd colors like yellow and bright green. You can also look if any worms are wriggling around. If you spot any of these, you may have to take the samples to your vet.

In particular, worms can take a toll on their bodies. As a result, your chickens will lack energy and start laying around. It would help if you treated them with the right deworming product. Therefore, it should not worry you a lot although you will need to help them as soon as possible.

Look at Their Feathers and Plumage

Like most animals, when chickens are unwell, they may stop looking after themselves. As a result, they will start looking disheveled. Sometimes, molting could be the reason. Molting is a process that a chicken undergoes two times a year. They usually grow new feathers after shedding the old ones.

However, if there are some bald patches, it could mean that other mates are picking on the chicken in the flock. It could also indicate that the chicken lacks some essential minerals or is infested with lice. This could be the reason why your chicken is lying down most of the time.

Is the Chicken Laying Eggs Normally

The general of your hen can affect their rate of laying eggs. If she is not getting the proper nutrition that she requires and is not in optimal health, her laying of eggs will be interrupted. A hen will more likely lay eggs less often when she is unwell. You may also find out that the eggs of a sick hen have wrinkled shells, are deformed, or have odd shapes.

A sick hen will also struggle or strain to strain to lay an egg if you are not around. You should take seriously any changes to how regularly your hen lays eggs. You can seek assistance from your vet in such occurrences.

You should inspect the legs and feet of your chickens if there are any obvious injuries or cuts. If they are any, you should clean the wound and wrap it to remain clean.

If the lower eggs of your chicken look scabby, thickened, and crusty, then it could be a sign of leg mites. They usually hide under the scales on the legs to snack on the tissue. It can be very painful, and birds with a severe infestation may start limping.

You should also check your chickens’ feet for bumblefoot. It is an infection on the underside of a chicken’s foot and is common when a chicken gets a cut on foot and walks around in mud or poop.

The above list covers possible signs that there may be an underlying health issue that makes your chicken lay down most of the time. In some rare occurrences, it may be normal for your chicken to lay around. It is advisable to check them and establish the problem.