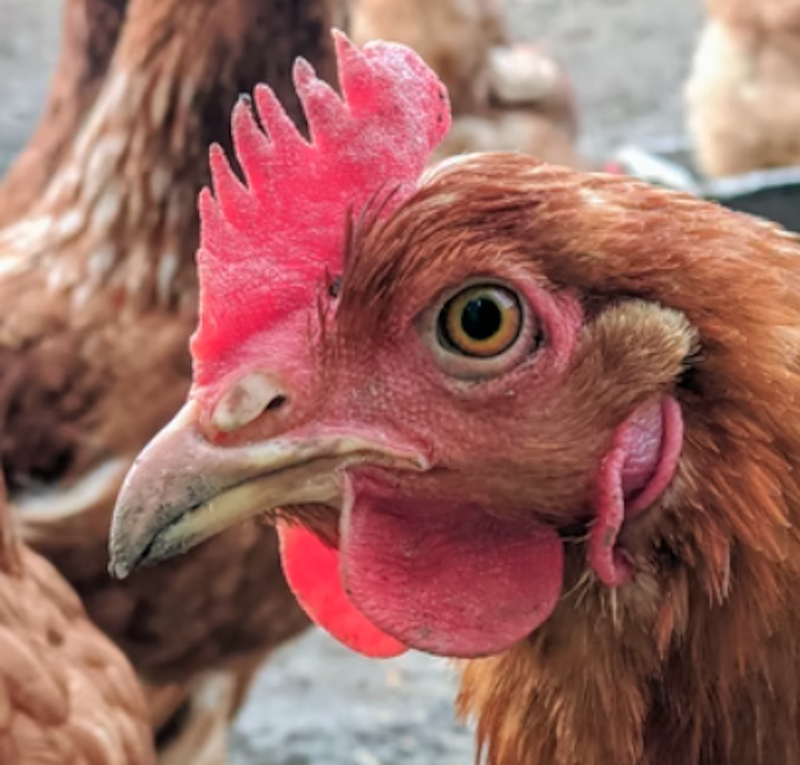 The earlobes of a chicken have one of the widely known myths about chickens. Some people may not even notice that chickens have earlobes and don’t know where to look. So where are chickens earlobes located?

If you have been rearing a flock of chickens. You must have probably heard of how the color of the earlobes of a hen corresponds to the color of eggs.

The earlobes of both male and female chickens are found on each side of the head. They are usually behind the eyes and above the wattles.

The ears are covered by layers of smooth feathers that help in protecting them from mites and dirt. It should be noted that chickens usually do not have external ears. However, they have a flap of skin located under the ear canals.

The skin under the ear canals is usually colored and fleshy. Its size may depend on the breed of chicken. Some chicken breeds may have thick and large skins. Other breeds have small earlobes that may not be easily noticed.

If you are not keen, you can easily mistake the earlobes as part of the wattles. In most breeds of chicken, hens usually have smaller earlobes as compared to the roosters.

Chickens can easily harness sound waves and transmit them to the inner ear. All breeds of chicken can regrow the damaged parts of the ear cells as they grow, unlike human beings, who are more likely to suffer hearing loss as they get older. This special adaption has captured the interests of scientists with the aim of applying it to people with hearing problems.

All birds need to have a good hearing ability. They must hear as early as possible when any predator is approaching. Chickens are able to tell the far a sound has come from just by gauging the time that the sound takes to reach their ears.

Chicks can hear the clucking of a hen when still inside the eggs. When a hen finds food and taps on the ground, chicks can efficiently respond from a distance.

In some cases, it might be true. However, there are several exceptions.

What are some of the standard exceptions?

There are other various exceptions. It is therefore essential to note that you can not predict the color of eggs of your hen by looking at the color of her earlobes.

Where did the myth originate from

There are no clear records that show where the myth originated from. Some people that it might have been the norm several years ago.

In some cases, there seems to have a link between the color of the earlobes of chickens and the color of their eggs. However, since there are many exceptions to this, you can not conclude that it is a rule.

What determines the color of an egg

Breeding is the most significant determinant of the color of an egg in chickens. A mixed breed of chicken can produce cream-colored eggs when her earlobes are red.

Initially, all eggs are white. However, they get pigmentations determined by genetics as they undergo development in the oviduct.

If the egg has enocyanin pigmentation from the beginning, then it will have the same color outside as it is inside. However, if at the later stages of development the egg gets protoporphyrin, it will be colored outside but white inside.

What determines the color of the earlobe

There are several health issues that may affect the chicken earlobe. In some cases, you can spot illness in chickens by looking at their earlobes. When doing your routine checks, you must check the following:

So what does all this mean?

The earlobes in the chicken are very delicate and can scab quickly. If you are doing your daily routine checks and notice that the earlobe wattles have a lot of scabby skin, it could be more likely that mites are the issue. The solution to this is giving your chickens a dust bath that has Diatomaceous Earth. The mixture of the two chokes mites. Diatomaceous Earth will help in the killing of larvae and eggs.

Fowl Pox is more likely to cause dark scabs and white lumps lamps on the chicken lobes, wattles, and combs. Currently, there is no known cure for fowl pox. However, you can prevent it by vaccinating all your chickens.

Fowl Pox spreads very fast. If one chicken in the flock contracts it, You can be sure of others contracting it too within a short time if they are not vaccinated.

You can treat the condition to alleviate the pain. Giving the chicken antibiotics can also help. If an ear infection in chickens prolongs, it can lead to permanent neurological damage.

Ringworm is a fungal infection that affects the skin. Chickens can have favus on their earlobes, combs, and wattles. It can be noticed by the presence of rough scabs that can either be off-white or yellow.

Ringworm can be treated by a cream known as miconazole. You can apply it two times a day to achieve good results in a few weeks.

Some chickens, especially the larger breeds, are more likely to suffer from heart diseases. Your chicken could be having a heart condition if it has purple or blue earlobes. You must always see a veterinarian whenever you suspect a heart condition in your chicken. The vet can treat the situation with a change in diet and medication.

Just like human beings, chickens, too, can become anemic. Anemia is caused by a lack of enough iron in the body. It can also be caused by having untreated mites. It is advisable to check your birds for mites regularly to prevent excessive loss of blood.

Stress is a common health condition in chickens. If the earlobes of your chicken are turning white, it could be an indicator that the bird is stressed. Many things can make your chickens be stressed. Some of them include severe weather, cramped conditions, and other illnesses.

You must establish the source of stress in your hen and remove it. This will have your birds feeling better again.

Frostbite is very common in chickens during the cold winter season. It is indicated by blackened spots on the earlobes and in the face. You can prevent it by keeping your coop more ventilated and very clean.

Sometimes sores on the earlobes can come because of the pecking order. Chickens, especially roosters, like to fight most of the time. The earlobes can be casualties during the fight.

Pecking sores are usually clean and do not have sores. You can apply Neosporin to speed up recovery and prevent further infections.

You can know the first laying of your young pullets by looking at the earlobes. If they are about to lay, it will be indicated by paling lobes. The lobes will be normal again after laying the first few eggs.

Chickens have earlobes found on each side of the head behind the eye and above the wattles. In most breeds, you can not quickly notice the earlobes.

The color of the earlobes has nothing to do with the color of eggs in chicken.