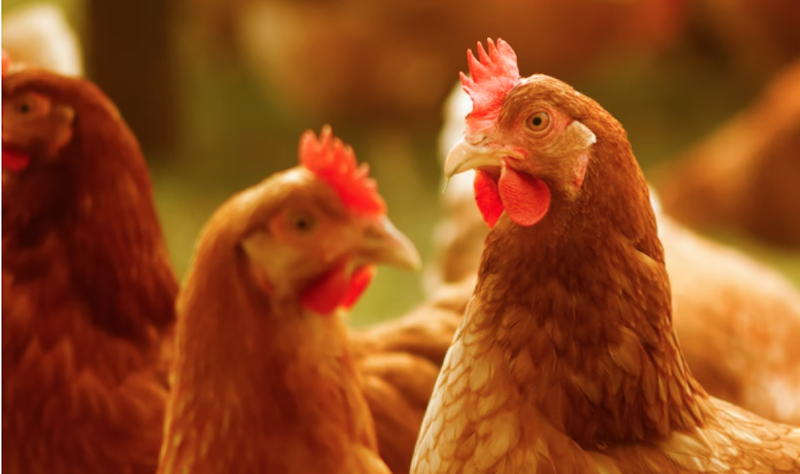 The common question that most people ask themselves when they look at a chicken’s head is, What is the red thing on a chicken? It usually looks like spiky flesh and another red dangly flesh on their chins.

If you have been asking yourself this question, worry no more! You are at the right place. This article will answer your question. Keep reading to learn more.

The Red Thing on The Head of a Chicken

The red thing on the head of your chicken is known as a comb. It helps chickens to keep cool, especially in the summer. Biologically, chickens do not have sweat glands like human beings. Therefore, they can not sweat to keep themselves cool as we do.

Instead of sweating, they use evaporative cooling, turning moisture on the lungs’ surface into vapor. This increases the flow of blood to the combs. A red comb could also be an indicator that your chicken is healthy. When it turns purple or black, it could be a sign of illness.

The Red Thing on The Chin of a Chicken

If you observe your chicken on the chin, you will see a red thing hanging off. It is known as the wattle.

Red Thing Dangling the Ear of a Chicken

Chicken wattles function the same way as combs. They help in regulating the temperature of chickens by increasing the blood flow when they are very hot. You can also observe them tell if your chicken is having a health issue.

The red thing dangling where the chicken’s ear should be is known as the earlobes. Chickens do not have an outer, middle, and inner ear as humans. It is, therefore, complicated to locate the actual ear of your chicken. However, you can easily see the earlobes.

The comb of a chicken usually comes in different sizes and shapes. There are several names used to describe their combs. This helps chicken keepers and breeders to describe the type of chicken they want.

As the name suggests, the pea comb looks like a line of peas on top of a chicken’s comb. They are typically smaller combs that are less susceptible to frostbite in the winter seasons. Pea combs are generally smaller and appear like a pullet’s comb. The comb is typical in chicken breeds like Buckeyes, Ameraucanas, and Brahmas.

Strawberry combs are common in the poultry industry. They are perfectly named because sometimes they look like a chicken has a strawberry placed on the head. They sometimes bring a beautiful view. The comb is typical in chicken breeds such as Malays and Yokohamas.

Cushion combs have almost the same appearance as the strawberry comb. However, they are typically smaller and smoother as compared to strawberry combs. It appears like a small cushion that sits forward on a chicken’s head. The comb is not very common among various chicken breeds. If you are interested in a cushion-combed bird, you can go for chicken breeds like Chantevlers.

The single comb is the most common type of comb and is mainly associated with chickens. It is an upright comb that has distinct points at its peak. If you have kept several chickens of different breeds, then you must be familiar with this comb. It is common in chicken breeds such as Leghorns, Rhode Island Reds, Faverolles, Ayam Cemani, and Barnevelders.

This type of comb looks precisely like what the name sound. It usually looks like a shell of walnut and sits forward on the chicken head. The comb may sometimes be quite unsightly and extremely huge as compared to the other types of combs. If you want a single comb chicken, you check out chicken breeds like Orloffs and Silkies.

Rose comb is an interesting-looking comb. This comb has an appearance of a pointy tube running from the top of the head towards the back of the head. It forms a spike or a tip at the end.

These combs are very flat on the head as compared to most of the combs. They are therefore ideal for the winter seasons as they may not easily contract frostbite. If you are looking for a rose comb chicken to add to your flock, you can check out breeds such as Sebrights, Silver Laced Wyandottes, and Rose Comb Brown Leghorns.

You can only find this type of comb in one breed of chicken, the Sicilian Buttercup. It usually has a magnificent look and may also look like a dual version of the single comb. However, its points are full circle and form a crown. Most chicken keepers sometimes describe it as a single comb that is split into two.

The Carnation comb resembles the single comb and is sometimes referred to as Kings by bird keepers and breeders. The only difference between the two is that the carnation comb will continue round the head of the chicken with some points at the back of the head.

If you are interested in adding chickens with this type of comb to your flock, there are only two breeds that you can check out. They include Empordanesa and Penedesenca.

This is a unique-looking comb that is not very common on most chicken breeds. It is also known as the devil’s horn. It has a V shape but appears like a pair of horns. If you want to keep chickens with this type of comb, you can check out breeds such as Sultans, Mottled Houdans, and Polish.

Why Do Chickens Have Combs?

You could be asking yourself how does a chicken benefits from having a comb on the head. What can surprise you more is that chicken combs are considered organs just like the liver, heart, and kidneys. Combs, therefore, serve several beneficiary purposes.

It is common knowledge that chickens do not sweat. Sweating in human beings helps in the regulation of body temperature. Since chickens can not sweat, they will have to control the temperature of their bodies through another method. This is the reason why they have combs and wattles.

The comb is the cooling and heating center of chickens. When it is hot in the summer, the chicken comb usually diffuses some heat into the air. This will help in reducing the temperature of your chicken. The comb will also help in preventing heat loss during the winter season.

Many breeders and chicken keepers who have reared chickens for a long time will tell you that the color of your chicken’s comb can tell you more about your chicken’s health. Depending on the breed of chicken, a healthy comb will be red, black, or purple.

If you have a pullet that has not yet reached the laying age, you will notice that it might be having a small and pinkish comb. You do not have to worry about it as it is entirely normal. Once her hormones start to surge, the comb will turn to either red, black, or purple, depending on the breed of the pullet.

Chicken combs that are shrunken or pale indicate that there is something wrong with your chicken. It may be an indicator that the chick is anemic as a result of mites and thick lice infestation. Besides, it may mean that your chicken is molting, has heat exhaustion, or is overloaded with internal worms.

A dehydrated or anemic comb will, in most cases, feel flat and dry. A blue comb in chickens can be indicating coldness, respiratory problems, or circulatory problems. A red comb that is hot when you touch it can be a result of fever in your chicken. If you are keeping chickens, you will have to be aware of these signs. Once you notice any sign, you should offer the appropriate treatment.

Chicks normally have inconsequential and small combs at an early age. However, the combs will grow once their hormones start circulating. Male chickens will have noticeable wattles and combs because of the testosterone. On the other hand, estrogen will give female chickens a smaller version of the combs.

Hens will want to mate with stronger roosters so that the offspring can have a high chance of surviving. The comb will therefore help[ in signaling strength and vitality. A rooster usually has a big comb meant to signal to the hens that he is strong enough to produce healthy chicks.

The combs in hens are smaller but will still give the same message to the roosters. If she has a vibrant red comb, it indicates that she is sexually mature and healthy. Research has shown that if a hen has a larger comb, she will lay more eggs. The hen will also have a greater bone density.

Combs are essential and help in controlling heat in chickens. They also help in sexual attraction and act as a health indicator. It is vital to understand the various types of combs and their colors.