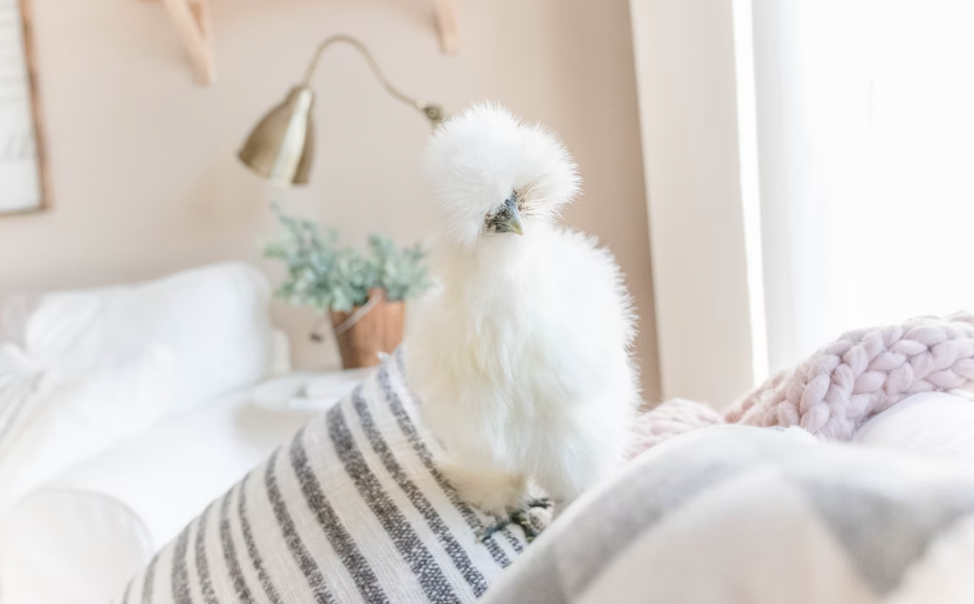 If you’re in the business of raising chickens or want one as a pet, you may be wondering if the Silkie rooster is the right breed for you. He’s gorgeous. And he’ll no doubt make a wonderful ally or addition to your flock. But, what are Silkie rooster characteristics?

For starters, the Silkie rooster isn’t usually aggressive. He crows. And he’s generally larger than his female counterpart.

But, it takes forever for Silkie chickens to mature. So, the characteristics of a Silkie rooster may not be readily identifiable. Let’s, therefore, examine the Silkie rooster critically to find out some of his most apparent features.

Where Does the Silkie Rooster Come From?

The Silkie rooster traces his origins to Asia. Still, a bit of mystery surrounds the exact location of his origination.

Some say he comes from China. Others insist he’s from Thailand. And some think India’s his right place of origin.

I’d, however, like to think the Silkie rooster came from China. And this bias mainly has to do with the writings of Marco Polo.

After all, the earliest description of the Silkie chicken came from him. And he journeyed extensively across Asia from 1271 to 1295, staying in China for about 17 years within this period.

The breed, though, was introduced into the West in the mid-1800s. And it was fully given the nod by the American Poultry Association in 1874. In the United States, all Silkies are Bantams as they’re usually smaller than regular-sized chickens.

Where Can One Find The Silkie Rooster Today?

Silkies are all over the world. And they’re a very popular breed in the United States. So, you wouldn’t have to go all the way to China to see a Silkie rooster.

Because of his small size, he makes a perfect addition to any space. You’ll find him in urban backyards and sometimes, even apartments.

You can also get a Silkie rooster from hatcheries, breeders, and backyard poultry farmers.

What Are Silkie Rooster Characteristics? How Does He Look Like?

He’s small and light enough to lie on your laps or for you to comfortably carry around in your arms. He may even make a case for some alone time in your pocket.

A Lot Of Colors To Choose From

The American Poultry Association recognizes only 6 Silkie rooster colors. These include splash, partridge, blue, buff, black, and of course, white.

Breeders, though, continue to develop Silkies to have more colors than those recognized. And you’re likely to see Silkie roosters come in red, gray, silver, lavender, or shades of these.

The Silkie rooster looks like he’s covered in wool. And it’s this unique appearance that sets him apart from most chicken breeds. He looks more like a stuffed toy than a chicken!

The truth, though, is that the Silkie rooster’s fuzzy-furry quality is because his feathers lack barbicels. They’re tiny hooks that hold feathers in place, giving them the smooth look we so often see in other chicken breeds.

His loose feathering means his feathers aren’t water repellent. So, you want to make sure he doesn’t get unnecessarily wet.

I must note that his feathers cover his entire body. Even his legs, down to his feet, aren’t spared!

Black has never been more beautiful

It’s not just his plumage that makes the Silkie rooster a truly distinct breed.

Unlike most chicken breeds, he has black skin, grayish-black meat, and even black bones. His legs, eyes, beak, and toes are all black as well.

Also, rather than four toes as in most chicken breeds, he sports five toes. His ear lobes are turquoise blue and his comb plus wattle appears purple-black. The comb is also shaped like a walnut. And for the Silkie rooster, it’s a bit rounded and wide and with several tiny bumps across the surface.

It’s either he’s bearded or not

Silkie roosters either have beards or they don’t.

The bearded Silkie rooster has an extra muff of feathers around his neck area, extending to his cheeks and even to his ear lobes. His entire face appears poofy, with just his beak the most obvious part you can see sticking out.

The non-bearded Silkie rooster’s face isn’t poofy. So, his wattles and ear lobes are easily visible.

Will I Be Able to Tell the Difference Between the Silkie Rooster and Silkie Hen?

It can be notoriously difficult to figure out the gender of Silkie chickens. They take longer to mature. So, you might not easily be able to tell a Silkie rooster from a hen unless he starts crowing or she starts laying.

Cockerels finish maturing around 10 to 12 months.

Because it takes longer for their secondary sexual characteristics to develop, sexing Silkie chickens is often more challenging than sexing chickens of different breeds.

Males will generally look larger than females. But, it may not always be a good idea to rely on his size to make him out.

Here are certain suggestive characteristics of the Silkie rooster that can help you tell him apart from the Silkie hen.

Both Silkie roosters and hens have fluffy heads.

For the Silkie rooster, though, his head fluff appears rather rough. More importantly, you’ll notice wisps of his feathery head (streamer feathers) sticking out and extending much further backward.

For the Silkie hen, you’ll notice that her fluffy top is more rounded and uniform than her male counterpart.

They also tend to grow larger than that of the hen. Plus, they’re a lot rounder, wider, and bumpier.

Generally, the Silkie rooster will have legs that are much thicker than the hen.

Again, when compared together, the Silkie rooster will have feet that are extremely fuzzier than the hen.

Despite all his fluff, the Silkie rooster tends to have hackle feathers (feathers around the neck) which are thicker, longer, and pointier than that of the hen’s.

He’ll also usually have tail feathers that are archy rather than straight.

The Silkie rooster generally acts more dominant than the Silkie hen. You’ll also notice him mostly standing or walking in an upright position.

Tidbitting in the Silkie rooster is also a common behavior. It typically happens when he finds a tasty treat and clucks to call the attention of the hens to the treat. Usually, he’ll continuously pick up the food and drop it till the hens notice it and come gobble it up.

Does the Silkie Rooster Crow?

Yes, he does! Just like any other rooster of other chicken breeds.

Is the Silkie rooster loud?

Yes, the Silkie rooster can be loud. Probably not as much as a regular-sized rooster. But, he never shies away from trumpeting his angelic voice to the world.

So, depending on your area, you may need approval from the authorities before keeping him.

Is the Silkie Rooster Aggressive?

As compared to roosters of other breeds, the Silkie rooster is by far docile and well-mannered.

He’s one of the very few chicken breeds fond of human affection. His gentle nature and cuddly appearance also make him the ideal pet chicken for children.

That said, all Silkie roosters don’t necessarily have the same personality. Some roosters may be less friendly than others. Generally, though, most Silkies are calm.

But, he’ll passionately protect his space and hens from whatever he perceives to be a threat.

Will My Silkie Rooster Do Well With Other Breeds?

Your Silkie rooster should get on well with your other chickens. However, since he’s generally docile, aggressive roosters within the flock may pick on him.

So, introducing him to a well-established flock of big birds may not be a very good idea. It’d be better if they were all raised together from when they were little.

Is the Silkie Rooster Hardy?

Your Silkie rooster won’t suffer from any health issues not known to regular-sized chickens of other breeds.

The only problem is that he’s more likely to be hounded by mites and lice because of his fluffy plumage. Regular dust baths are therefore important for him.

More importantly, the Silkie rooster is considered a cold-hardy breed. And his plumage will keep him warm even when temperatures sink to as low as – 17 degrees celsius. Still, he’ll thrive in whichever climate he finds himself in.

Because of his fur-like feathers – which aren’t water-resistant – you want to make sure that he’s protected from directly getting wet.

How Long Does the Silkie Rooster Live?

The Silkie rooster will live till he’s about 7 to 9 years. This, of course, is subject to conditions like good health, a safe environment, and good food/water.

Not all Silkie roosters will live to be 7 years, though. Some will die as early as 4 years if they succumb to some disease or accident.

The Silkie rooster is like a cute, snuggly, fluffy ball with just a beak sticking out. And it’s not just his adorable appearance that makes him a people’s favorite; his calm nature means he’s popular with adults as well as kids!

Overall, the characteristics of the Silkie rooster make him an excellent addition to your household or flock. I’m sure you’re going to love him to bits.

Defeathering Tips When Plucking A Chicken!