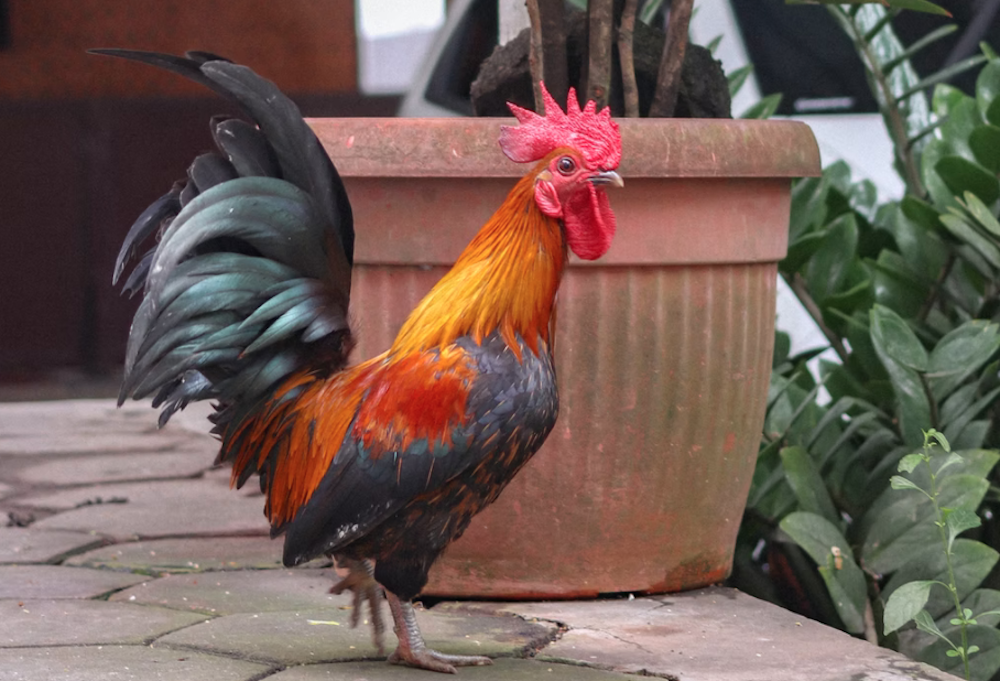 Statistics show that most of the chicken eaten by Americans annually hens. You wonder where roosters are in those figures. You even ask yourself one of the most common questions: do we eat male chicken meat?

The consumption of chicken has been reaching high numbers every year. It is believed that in a year, residents of the US eat more than 8 billion chickens. The demand for chicken has been increasing across the years.

Can you eat a rooster?

Yes, we can eat male chickens just like hens. They almost have the same nutrition value and are safe to eat. It is not written anywhere that people should not eat roosters.

You may never have heard of people consuming roosters. However, the fact is that several people enjoy this meat and even prefer it to hen meat.

Most homes in the US do not raise their chicken for eggs. For those who do, they only keep one or two roosters in their flock. Most people raise chicken for commercial purposes. In this case, it is hens that are reared for the production of eggs.

There are many reasons why hens are more popular table birds as compared to roosters. You may hardly find a rooster in a homestead in the US. Besides, most of the chickens that you may see in supermarkets are hens.

Many roosters are not necessary when raising your flock of chicken

It is a fact that hens can lay eggs on their own without a rooster. Therefore, one does not require many roosters in his flock.

A rooster will only be necessary for your flock if you want fertile eggs. Only fertile eggs can hatch. One rooster is enough to serve 15 hens in a flock. You can therefore not eat that rooster since he has an important job to do.

If you are raising eggs for eggs only, then there is no need of keeping a rooster since your hens will lay eggs on their own. You can, therefore it what is not there. It makes sense that it is very unnecessary to rear roosters and eventually eat them when all you are in need of is hens for the production of eggs.

It can be assumed that people ate many roosters during the pre-industrial period. When a hen hatches, almost half of the chicks are always male. It would make sense to eat most of the male chicken after they have grown since only a few roosters would be needed to fertilize eggs. Households thus kept hens to lay eggs and ate roosters.

Of course, there are no rules that state that people should not eat roosters. However, some laws may prohibit people from keeping roosters in some residential places, especially in urban centers like towns and cities.

Generally, roosters are so loud. They will crow more often, especially in the morning hours. Noises in the morning are more likely to reach far places and even cause disturbance to other people in the neighborhood. Because of this, authorities in most places do not allow people to own roosters.

Because of the rules, many people rearing chickens do not even have a single rooster in their flock. They keep on hens to avoid getting themselves on the wrong side of the law. In such places, it is very hard to eat rooster meat. Young children may even not be aware that roosters really exist.

One of the main reasons why you may not be likely to find roosters in your neighborhood is because of their temperament. In commercial poultry, temperament is an essential factor that you will have to consider before starting practicing.

Each breed of chicken has its temperament. Some breeds are tame, while others are very aggressive. However, this statement does not apply to male chickens. No matter how gentle and calm a chicken breed is, the rooster will always be aggressive.

Many people who rear chickens at their homes have only one or two male chickens. This is because roosters are not tolerant and friendly to other make chickens. In most cases, you can hardly introduce a rooster to a flock if there is one already. There are proper steps that you will have to follow.

Roosters get territorial most times. You will therefore need a lot of space if you want to keep more than one. Hens, on the other hand, are tolerant and accepting of others.

The quality of meat

Roosters’ meat is chew and leathery. It does not tenderize easily and will take a lot of time to do so. If you are looking for something easy and fast to cook, then it is not the best option for chicken meat.

The time taken by roosters to grow is almost the same as that taken by hens. However, roosters of the same age may not have the same meat as hens. In general, rooster meat is not worth the hassle as compared to a hen.

A capon is a rooster that has been neutered. Although the process is very painful to the rooster, it is not banned in any of the US states.

Capons are valued male chickens. The process is meant to improve the meat quality in roosters.

Capons will usually take a longer period to attain maturity. Besides, they usually look smaller after attaining maturity, as compared to a normal rooster. They lose characteristics that are common in roosters thus end up being liked by most of the keepers. They are less aggressive and active.

How to harvest roosters

If you own a flock, you will know that roosters are ready to be harvested when they start to terrorize hens. This is an indicator that they have matured and can now be eaten. In most cases, the roosters mature at the age of 6 months.

So how do you harvest your roosters?

Lock up your chicken

Harvesting is based done in the morning. Lock the roosters in a smaller place the night before so that you can easily access them.

The next step will be preparing the place where you will work from. It is important to ensure that the place is very clean.

Plucking of the rooster is recommended instead of skinning. This is because there are a lot of nutrients and flavors under the skin.

They might be tempered if you choose to use skinning. Ensure that you have boiling water before beginning the process.

Remove the rooster from the coop and carry them with their heads upside down. This will ensure that he remains motionless and is not stressed. Place the head on a chopping block and stretch the neck. You must ensure that the head is placed on the chopping block between two nails.

A sharp ax or knife is then brought down swiftly across the rooster’s neck. The head can be severed with just one chop. You can then place the carcass into a container for it to stop flopping.

The rooster is then submerged in boiled water. Boiled water will make feathers come out quickly when plucking. It might need some good time to pluck all the feathers out and make the rooster clean and friendly.

You can keep some inner parts, such as the gizzard. However, you must remove all the other parts of the digestive tract.

Once you have removed all the inner contents, you can cut the rest of the body into sizeable parts ready for cooking.

It is essential to understand that there are many ways of cooking chicken. Every type of chicken has its own best way in which you can cook it. For instance, there are various ways to cook broiler chickens, laying chickens, or the traditional chickens. The method of cooking may also depend on the availability and preference of flavor.

Some of the guidelines for cooking a rooster are:

In most cases, rooster meat is shredded up or cut into pieces and served with vegetables and rice. Most traditional cooks prefer cooking them together at once.

Most Americans like it when chicken is separate from the vegetable dishes. Besides, they prefer roasted or fried chicken to boiled one.

How To Process a Chicken For Meat

Defeathering Tips When Plucking A Chicken!