Did you ever think about the meaning of the sarcastic expression ‘running like a chicken with its head cut off’? If chickens can run headless, then they have fascinating brain anatomy, or maybe they don’t even have a brain at all. So the question remains, do chickens have brains? You’ll be astonished by the answer! Read on to find out.

The Chicken Brain: A Fascinating Anatomy

The ultimate answer is yes; chickens do have brains. But they aren’t in any way similar to the human brain, anatomy-wise. Instead, a chicken’s brain consists of two hemispheres, each working differently to comprehend various information.

Do you know what’s utterly fascinating? A hen has both binocular vision and monocular vision. As a result, hens can look at the world with both eyes, and they can also use each one on their own. This means that chickens can look at separate images simultaneously without having an overlap of visualizations between their two eyes.

The monocular vision comes in handy when chickens act like prey animals in wild nature. They’re able to get a panoramic view of the surrounding area using their eyes. As a result, they can expect predators and be ready for their attack. On the other hand, chickens use their binocular vision to look for food and to recognize other birds in their flock. 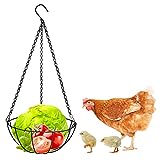 Moreover, contrary to popular belief that chickens are stupid animals, they can process two pieces of information at the same moment effortlessly. They can use one eye to watch out for predators, while the other eye forages for food. This teaches you to never think about sneaking up on a chicken!

As for a chicken’s brain size, compared to their large bodies, they have tiny brains. Interestingly, studies show that this is because of the selective breeding humans have been attempting for centuries. When chickens lived freely in nature, they had smaller bodies and bigger brains. But since they’ve been domesticated, the situation has changed.

As a result of living among humans, chickens adapted to safe living conditions, which means they don’t have to be on watch all the time like before. Moreover, domesticating those birds has led to them being fatter; thus, the brain-to-body mass ratio has undergone profound changes.

How Smart Are Chickens?

There has long been a debate about whether chickens are intelligent birds. If you’ve ever raised chickens before, you should know better than to call them stupid—people who believe that have mostly never seen an uncooked chicken before.

However, the definition of being smart is relative. You can’t do chickens injustice and compare their brain to a human’s. Intelligence depends on animals’ ability to live in various conditions, ability to feed on their own, and ability to catch predators. Well, chickens ace all three.

If you raise chickens, you’ll notice how they act differently with individual people, which means they can recognize us. They also have different personalities; they can be introverts or extroverts.

Do Chickens Have Emotions?

Since chickens are treated like commercial production machines, we often forget to perceive them as emotional animals. However, they feel emotions vividly. First of all, hens get all of the maternal feelings when it comes to their chicks. They’re highly protective and can feel frightened for their offspring.

Second of all, hens can become depressed and show symptoms if they get separated from their flock. This is due to the powerful community sense that those birds have. Chicken raisers know this as they’ve probably seen it before. However, if you’re a beginner, this may be new information for you.

When it comes to death, some chickens go through loneliness when a flock mate dies. However, some birds just don’t care enough; they’ll munch casually on the other chicken’s dead body if they feel hungry.

Finally, when hens feel that their death is nearing, they isolate themselves. The members of the flock often visit her at this time. They softly coo in her ear and give respect through maintaining quick eye contact.

Some chickens are even so considerate that they may stay with the dying hen until her time comes. Afterward, they return to their regular routine. Life goes on, even for chickens.

Do Chickens Have the Same Senses as Humans?

Chickens and humans share quite a number of senses. However, chickens’ dominant senses are sight, taste, and touch. They can differentiate between various types of physical sensations. For example, they can determine whether the temperature is cold or hot and know the difference between pressure and pain.

Luckily, their cognitive capacity hasn’t been compromised due to domestication by humans. Chickens can hear and smell smart. Some breeds are even able to sense magnetic fields. In addition, chickens have a unique cluster of nerves at the tip of their beaks. The nerves are called mechanoreceptors, and their main job is to allow chickens to feel items using their beaks.

Interestingly, chickens can also see more colors than us. They’re also able to hear high and low-frequency sounds, which we don’t.

Can a Chicken Really Run Headless?

Logically and scientifically, the answer to this question should be no. But when did science ever abide by rules? You’ve probably heard some funny stories about chickens running without their heads for a few seconds after slaughter. How is this possible?

To explain this scientifically, when you cut a chicken’s head off, you disconnect its brain from the rest of the body. However, the culprit here is oxygen. If there’s residual circulating oxygen, you’ll see the embodiment of the funny expression ‘running like a chicken with its head cut off’.

The expression came from the fact that when chickens run without their brains, their legs move independently without something controlling them. As a result, they run in a spontaneous fashion that ought to make you laugh.

You may not have heard this story before, but chickens have legends just like we do. Their legends don’t necessarily sing high notes like Freddie does or give awe-inspiring speeches like Luther King, but they do something way more extraordinary, like living for 18 months without a head.

Mike’s story goes back to the 1940s, when a farmer called Lloyd Olsen butchered a few chickens from his flock, only to notice one of them strutting around without a head but with a great deal of self-confidence.

Like any farmer would do, Olsen went to sleep, hoping that the chicken would give up on life till the morning came. But, little did he know, Mike wasn’t planning on walking away without becoming a legendary tourist attraction.

The headless chicken gave Olsen fame that he wouldn’t have dreamt of having. They toured different states together so that tourists could see the wonder. Olsen kept Mike alive by carefully giving him liquid meals through a syringe.

Since this happened nearly 80 years ago, people didn’t have a clue on how a chicken could live without a head. They thought Olsen was a magician. But since we understand that magic only belongs in Hogwart, we now have a scientific explanation for the bizarre phenomena.

While Lloyd Olsen was butchering Mike, he missed the parts that gave him life. To elaborate, chickens’ brains are located at the back of their heads at 45 degrees. That means that some slaughtering angles may not fully get the brain. This happened in Mike’s case, as his brain got butchered, but his brain stem pushed through.

The unexpected presence of the brain stem gave Mike the ability to breathe, maintain a healthy heart rate, and do some reflex actions. As a mediocre end to a magnificent story, Mike simply decided he’s had enough of living without a head and choked to death in Phoenix on tour.

While the bird died, the story remained. Accordingly, if you visit Colorado in May, you may get to see the headless chicken festival that they hold every year in memory of the peculiar event.

As well as the pointed beaks and the delicious eggs they produce, chickens also have brilliant brains and exceptional vision abilities. They can focus on two actions at the same time, which means that while they’re looking for food in the backyard, they’ll also be watching you closely.

Moreover, chickens can feel emotions, and they have different personalities that you’ll notice clearly when you raise them. Now that you know how intelligent chickens are, you’ll think twice before calling the birds stupid!