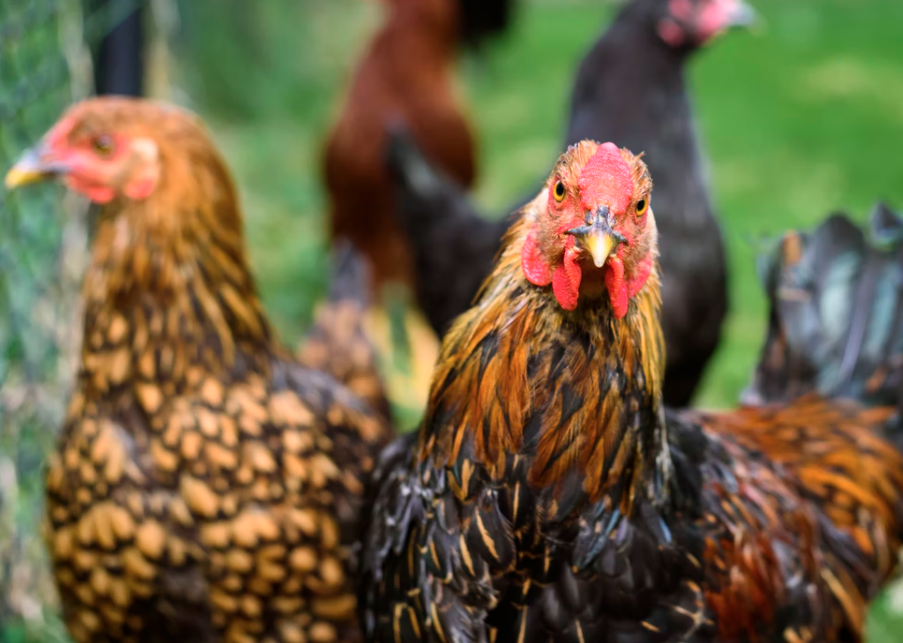 Watching the Golden Laced Wyandotte saunter on green pasture as her mottled, rich brownish-gold plumage glistens in the sun is an absolute stunner!

They don’t come in flashier and more spectacular fashion than this, And it’s why I call her the Rolls-Royce of the chicken fraternity. But, limiting her excellence to her dazzling plumage is a mistake you don’t want to make.

In the world of top-class utility birds, she holds her own quite admirably. She lays a respectable amount of medium to large-sized eggs every year. And she grows to a decent-enough size for meat purposes.

She’s also hardy and easy to manage because of her calm temperament. There’s so much more to like about her. If you’re considering the Golden Laced Wyandotte? Here’s everything you need to know.

Where does the golden Laced wyandotte come from?

To understand the origin of the Golden Laced Wyandotte, we need to go as far back as the mid1860s. This variety wasn’t created in 1865. But, the Silver Laced Wyandotte was.

The Silver Laced version of the breed was created at a time when there was a crying need for chicken breeds that did more than lay the occasional egg or provide meat that was subpar and chewy.

Thanks to H.M. Doubleday, John Ray, L. Whittaker, and Fred Houdlette, the Silver Laced Wyandotte was a success and was admitted into the Standard in 1883.

Due to sparse documentation, though, we’d never know for sure which chicken breeds were used in creating the Silver Laced Wyandotte. It’s however thought that dark Brahmas and silver spangled Hamburgs were used in developing the breed.

The name, “Wyandotte” was chosen by the initial creators of the breed in homage to a Native American tribe that had warmly received settlers amongst them. Note, though, that Wyandotte chickens were previously called “American Sebrights” before recognition by the APA.

The Golden Laced Wyandotte and The american poultry association

The APA formally recognizes more than 18 varieties of the Wyandotte breed.

This includes the White, Black, Buff, Barred, Columbian, and a host of others. The APA, nonetheless, doesn’t recognize the Lavender, Black Laced Red, Violet Laced, and Chocolate varieties.

As for the Golden Laced Wyandotte, the APA accepted the breed into the Standard in 1888 – 5 years after recognizing the Silver Laced variety.

The gold and black lace pattern in the Golden Laced Wyandotte is a remarkable work of art.

If you’ve got a flock that provides very little aesthetic pleasure, then she’s the eye candy you need to add – a proper show bird by all standards.

While her gold lacing appears more pronounced than in her male counterpart, he’s equally as gorgeous.

The Golden Laced Wyandotte is on the large side. She weighs about 8 lbs while her male counterpart weighs about 9 lbs.

She has a short, stout body that appears rounded when observed from her sides. She has a shortened back that’s wide at the shoulders, dipping slightly as it approaches her tail.

Her breast is broad and well-rounded. Her head is small and sits on a thick neck of medium length. Wings are medium long and fold horizontally to her sides.

She sports a rose comb that’s bright red as well as medium-sized wattles of the same color.

She sports expressive eyes that are reddish-bay. Her earlobes are red. And her short, slightly curved beak can either have a dark yellow or horn color.

Overall, she sports a dense plumage of beautifully patterned gold feathers, nicely meshed with black lacing/streaks that attach deftly to one another.

While you’ll find black streaks on her neck feathers, they don’t appear as much as they do there as compared to the rest of her body.

Feathers around her thighs have a dark-slate color. And her tail feathers are also largely black.

Her shanks are of medium length and as yellow as her skin. They also carry no feathers on them. Toes are only four and well spread.

Her tail is of medium length, well-defined, and spreads well at the base.

How does the golden Laced wyandotte behave?

The Golden Laced Wyandotte has a calm disposition and is not particularly aggressive or high-spirited.

But, she has quite the personality. She’s very self-assured and may sometimes come off as distant. She’s also not the cuddly type.

But, the thing with chickens – as with any other person or animal – is that each bird has a personality distinct from the other.

So, you might end up raising a Golden Laced Wyandotte that’s ridiculously friendly –preferring to sit on your laps, enjoy cuddles, and eat treats from your hands as reported by some owners. Or you might end up with one that’s incredibly aloof.

You’ll also find that while you can raise your Golden Laced Wyandotte with other chicken breeds, she’s quite assertive.

More importantly, she’d prefer to hang around her breed members rather than around those of other breeds.

She’s at her happiest when foraging. And though she’ll take well to confinement, constructing a run-enclosure by her co-op – if you can’t let her out completely – will be most ideal.

Is the golden laced wyandotte a good layer?

If you’re going in for the Golden Laced Wyandotte because of eggs, just know that she’s a dependable egg layer.

With her, you’re getting a total of about 200 eggs in a year – give or take – factoring in the periods she’ll spend molting. She’ll lay approximately 4 eggs every week. Eggs usually sport a cream or light brown color.

The Golden Laced Wyandotte is on the large side. So, she might not start laying as early as 18 weeks as many other breeds do.

Ideally, you should expect your bird to start laying when she’s between the ages of 24 to 28 weeks old.

The Golden Laced Wyandotte isn’t a reliably broody hen. It’s a good thing if you’re simply in for the eggs as hens stop laying temporarily when they become broody.

Is the golden laced wyandotte a good meat producer?

So, it’ll take about 16 to 24 weeks for the bird to reach a decent-enough size for the table.

Because of this, it might not be very economical to raise them for the meat market.

Still, if your goal is to be self-sufficient, your extra roosters or retired layers should be able to supply you with plenty of meat.

caring for the golden laced wyandotte

Taking care of the Golden Laced Wyandotte is like caring for any other chicken breed.

There are no special ailments she’s prone to. If anything at all, her physical make-up perfectly sets her up to withstand certain afflictions.

Any housing structure is appropriate for the Golden Laced Wyandotte as long as it keeps her safe from the elements and predators.

Being a large breed, she’ll appreciate more space. So coop spacing of about 5 to 6 square feet per bird is most appropriate.

Total confinement isn’t the best way to raise the Golden Laced Wyandotte. So, even if you don’t want your bird(s) free-ranging, constructing a run adjacent to the coop is most desirable.

That way, your chicken(s) can still get access to some sunshine, fresh air, grits, and bugs without predisposing them to predators.

Ideally, your run space should accommodate a bird for every 10 square feet of space.

This breed loves to forage. And though she’s generally not flighty because of her heavy size, fencing of about 4 to 6 feet high should be enough to keep her from going out while barring predators from entering.

For more protection from predators, you should consider electric fencing. Providing enough nesting boxes for your hen(s) is also crucial.

Ideally, each box should measure 12 inches deep, wide, and tall. Larger boxes aren’t appropriate as they tend to accommodate more than one hen at a time, causing eggs to get broken/dirty.

The Golden Laced Wyandotte doesn’t require any special diet out of the ordinary.

Primarily, what you should be feeding her with is high-quality commercial chicken feed. This should make up about 90% of her diet.

What’s important is to adjust the bird’s protein intake as she matures. A starter feed is most ideal for her from her very first week to when she’s about 16 weeks old.

Starter feed usually contains about 20 to 22% of protein to cater to all her growth needs.

When she’s about 16 weeks old, move her to a layer diet. A layer feed will contain about 16 to 18% in addition to appropriate amounts of calcium for stronger eggshells.

For cockerels, it’ll be more ideal to introduce them to an all-purpose feed containing more amounts of protein but less calcium.

While you may be tempted to settle for cheap, low-quality feed, this decision may come back to bite you later when your hen isn’t laying as much because she’s not getting enough nutrients.

Aside from commercial feed, you may supplement her diet with treats like carrots, bread, apple cores, broccoli, and cucumber. Citrus fruits like lemons and oranges, though, aren’t advisable.

Again, if allowed to forage, your chicken should be able to supplement its diet with seeds, insects, and foraged greens.

During the winter, you should endeavor to provide her with more feed as she won’t be foraging to supplement her main diet. What’s more, she’ll need a lot more energy to keep warm.

Make sure to always make clean water accessible to your bird, always. A dehydrated hen won’t give you any eggs.

The Golden Laced Wyandotte is a solid, hardy breed.

Her dense feathers and rose comb means she’s able to keep herself warm when temperatures are low and won’t suffer from frostbite.

She’s thus more suited for very cold climate areas than extremely warm ones. If you’re thinking of raising her in an area that’s constantly blazing hot, then you might have a problem.

Still, you may take some necessary steps like providing shade, enough cold water, freezing her feed, and installing a fan in the coop to keep her cool.

How long does the golden laced wyandotte live?

No one knows for sure how long any single living organism will live.

Generally, though, chickens have a lifespan ranging from between 6 and 8 years. The Golden Laced Wyandotte isn’t any different.

In the absence of diseases and predators, plus with good nutrition, your bird could live a long, enjoyable life – usually between 10 and 12 years old.

Is the golden laced wyandotte rare?

In recent times, this breed has become very popular and has quickly become a favorite for most backyard poultry farmers.

The breed isn’t rare. And you can find chicks to buy from most hatcheries and farms.

Depending on whether the chicks you’re buying are “straight-run” or not, one chick will cost you anywhere from about $2.00 to $6.00.

There’s everything to like about the Golden Laced Wyandotte. She has the most striking of appearances. But, it’s not just her fancy plumage that sets her apart from the masses.

She’s very winter-hardy. She’s a very good lawyer. And she can supply you with meat when you need her to.

Is there anything the Golden Laced Wyandotte cannot do? I think not.

Considering Orpington Chickens? Everything You Need To Know

Tips When Raising Chickens For the Freezer