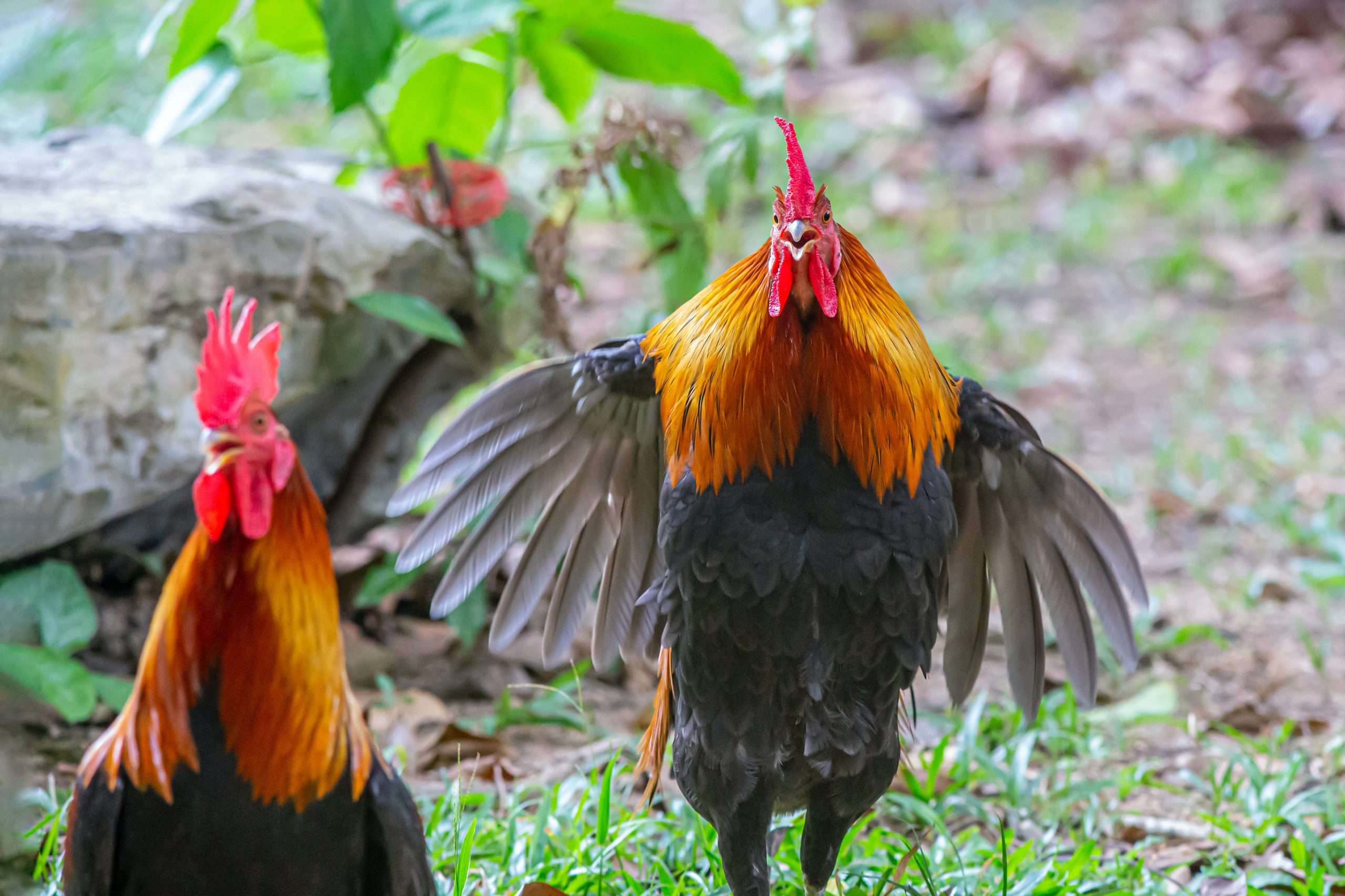 There’s just something about those chocolate brown eggs from Black Copper Marans chickens that seem to wow both chicken breeders and enthusiasts alike.

Even in the fictional world, iconic heroes aren’t left out of the frenzy. In each one of Ian Fleming’s 12 novels, James Bond never has breakfast without eating an egg. I wonder which chicken those eggs came from.

But, it’s not just their eggs that are dashing. The birds themselves are showstoppers! A mixture of jet black and copper coloration gives them a striking appearance. Combine this with their gentle nature and egg-laying qualities and you’ve got a super addition to your flock.

If you’re considering Black Copper Marans chickens, here’s everything you need to know to make your choice worthwhile.

Black Copper Marans chickens are a French breed. They come from the port town of Marans in southwestern France.

Their history is a little murky because of the involvement of a variety of breeds when they first started out. However, we can trace their ancestry to the late 12th century.

The coastal city of La Rochelle was very close to the town of Marans. Sailors at the time used to entertain themselves with gamecocks involved in cockfights en voyage.

When they arrived at the port of La Rochelle, they exchanged those gamecocks that survived the cockfights with fresh food from the locals.

Eventually, these gamecocks – including the Old English Game – found their way into the farms and flocks of the locals.

The gamecocks bred with the landrace local hens, giving rise to the original birds from which Black Copper Marans chickens would eventually come. These birds were called Marandaise.

Black Copper Marans chickens are believed to have inherited the plumage color and robustness of the gamecocks that sired them.

To improve them further for the table, Marandaise chickens were later bred with larger breeds such as the Brahma and Croad Langshan.

A brush with Extinction

The breed standard was officially defined in 1930 in France.

However, after the second world war, the popularity of the breed fell off. And Black Copper Marans chickens were nearly wiped off the face of the earth.

Thankfully, in the early 1950s, the French government – through the Department of Agricultural Services – in conjunction with the Marans club and other breed enthusiasts started a special program to salvage the situation.

The program proved to be a hit! And in 1952, they were able to boost the breed’s egg-laying capacity from almost 168 eggs in the previous year to 200 eggs.

In April of 2011, the APA formally accepted the breed into the Standard as a Continental breed.

Note that breed standards may differ widely across different countries.

Black Copper Marans chickens are rather large breeds. Roosters weigh about 7 to 8 lbs. Hens, on the other hand, weigh about 6 1/2 lbs.

They have a striking appearance and are up there with some of the most stunning breeds in chickendom.

While roosters appear more regal than hens, hens are still gorgeous in their own right.

A colorful combination of black and copper

Both roosters and hens sport a delightful mixture of black and copper plumage.

Roosters are largely covered with a reddish/coppery color around their hackle feathers (neck area).

Their hackle feathers (back regions) generally have this reddish/coppery outlook too.

Their undersides and tails, though, remain black. And there’s this iridescent green-like sheen to these black feathers that almost makes them sparkle.

Hens, on the other hand, are widely jet-black. You’ll still find copper markings around their necks though. In some, these copper markings may be largely unrecognizable.

Both roosters and hens have single combs which are upright and bright red. Roosters, of course, have much larger combs than hens do.

Combs are also zigzagged and have five points. In roosters, the blade of the combs stretches past the skull but doesn’t touch the neck.

Both roosters and hens have expressive eyes that are reddish-bay. Ear lobes are red. And beaks, which appear slightly curved, have a horn color.

Shanks are of medium length and have a dark-slate/pink color. The breed should also have slight black feathering on the shanks.

Toes are just four and should also be slightly feathered. Beneath their toes, the birds should have white soles considering they have white skin too!

These chickens come in a trapezoid body shape and have wide shoulders. They also have backs that seem to slope slightly downwards. But, hens are usually rounder than roosters are.

The birds have a well-defined tail that is chiefly black. Both hens and roosters have tails which they carry at 45-degrees above horizontal.

Black Copper Marans chickens are sociable and peaceful birds. They’re a great mix to any flock and will blend in with no troubles.

They’re docile and show no signs of nervousness around people or other farm animals.

While they’ll enjoy your presence and even love to eat treats from your palm, they’re not exactly the cuddly type of chicken. Exceptions aren’t uncommon nonetheless.

Roosters are dominant and protective of their flocks. Due to their ancestral association with gamecocks, roosters may occasionally go out of step. It is quite rare, however. And behavior that’s excessively wild or lively would be a fault in the breed.

They’ll take well to confinement. But, Black Copper Marans chickens love space and are at their happiest when allowed to forage. So, you might want to keep this in mind when constructing their housing.

Do Black Copper Marans Chickens Make A Lot of Noise?

The truth is that all breeds of chickens make noise.

Hens will regularly sing the egg song during laying periods. And roosters being the great heralds they are, won’t stop announcing the break of every new dawn.

Black Copper Marans chickens are a dual-purpose breed. So, they’re certainly good for the table.

However, it may not be economical to raise them for their meat. It takes a rather long time for them to mature. And they need to consume an awful lot to reach market weight.

Of course, slaughtering old hens and extra roosters for meat is perfectly fine. And you’ll soon find that their meat is more flavorful than those of other breeds.

These birds are resilient. They aren’t predisposed to any unique conditions/diseases unknown to the larger poultry family.

They’ll do well in whichever climates they find themselves in. You’ll soon find that they’re an extremely cold-hardy breed.

But, because of their large combs, they’re easily prone to frostbites.

For a long time, Black Copper Marans chickens have been hard to find. In recent times though, they’ve gained much popularity because of their eggs.

Finding them to buy shouldn’t be as hard as it was 5 or 6 years ago.

In poultry auctions, you may find some to buy. However, using this option may not be advisable as you may be unable to assess the breed’s quality.

You may also choose to contact certain farms/hatcheries online to purchase. Again, there are dozens of Facebook communities/groups involved in raising the breed who may be willing to sell.

Additionally, you may navigate to the Marans club breeders directory to purchase from quality breeders who are willing to sell.

How much Do black copper marans chickens cost?

The cost of the birds will vary from seller to seller. Also, the bird’s sex, age, and quality will influence his or her price.

Generally, though, Black Copper Marans chickens aren’t expensive. They’re a mid-priced bird. For around $12.00 to $25.00, you should be able to buy high-quality, straight-run day-old chicks.

From a well-known breeder with superior egg quality, you may have to pay in excess of $25.00 for a day-old chick.

They’re just OK layers. They are by no means, egg-laying heavyweights. Most people raise them for their egg color rather than their egg production rate. So, you should keep that in mind if you’re getting them solely for their eggs.

They also usually start laying around 5 to 6 months of age. Some may take longer. And it all depends on the hen’s diet, genetics, and time of the year.

Black Copper Marans hens are most coveted for their egg color.

They lay the darkest colored eggs of any chicken breed in the world! Egg colors usually range from mahogany to dark chocolate brown. Occasionally, they may appear speckled.

All eggs start out white in the body of any hen during the egg-laying process.

In Black Copper Marans hens though, a pigment, protoporphyrin IX is added in large quantities to the exterior of the eggshell as it travels through the oviduct.

The fascinating thing about these eggs is that they’re laid wet. So after they’re freshly laid and before they properly dry out, you can scrape off the chocolate color!

Yes, they all do! But, they’ll likely lay different shades of dark brown depending on the season.

For instance, a hen’s very first eggs will be the darkest. As she continues laying, the eggs will take a lighter shade of dark brown.

As she approaches winter or starts molting, she’ll stop laying. After the break, she’ll begin laying again. But, this time, she’ll be laying the eggs at their darkest once more and the cycle continues.

So, they’ll make a thoroughly endearing backyard pet. But, the coolest thing about them is their chocolate egg color. It’s a sight to behold, really!

So, if you’re a huge fan of colorful egg baskets, then you have no choice but to go all out for the chocolate-egger chicken!.