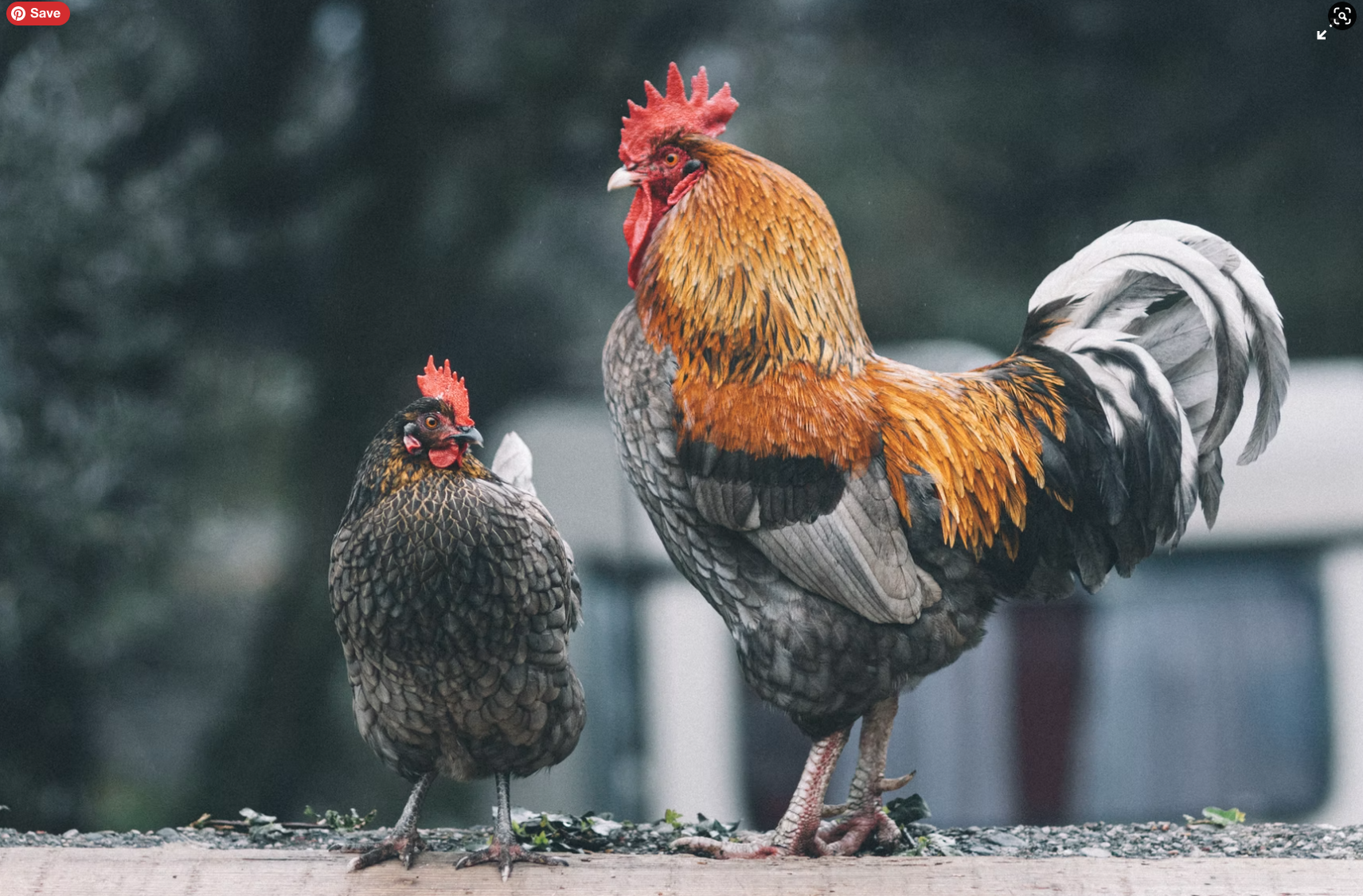 The right answer? It is scientifically impossible for male chickens to lay eggs. Why? Well, they don’t possess the physical attributes to make egg-laying possible.

It’s much the same way male humans cannot get pregnant and bear babies. At best, they can only fertilize eggs. And it’s the same for roosters!

Can Male Chickens Lay Eggs? Why It’s Not Possible

There are over 100 chicken breeds in existence today. Physically, each breed may look remarkably different from the other. And a breed may possess certain traits unique to just that breed.

Still, the reproductive systems and processes of chickens don’t vary regardless of the breed they belong to.

The internal biology of chickens determines whether they can lay eggs or simply fertilize them.

Why female chickens can lay eggs

Female chickens are born having two ovaries. However, as she nears maturity, only one of her ovaries develops and becomes useful. The second ovary, on the other hand, doesn’t ever develop.

The ovary consists of thousands of tiny ova or yolks. Eggs begin to form in a female chicken’s body when her ovary releases a mature egg yolk into the funnel of her oviduct.

It’s while the egg yolk is making its way through the hen’s oviduct that it develops the egg white and shell.

Male chickens aren’t born with ovaries like female chickens. Rather they have two testes that produce sperm and that are responsible for making testosterone.

Their sexual organ, the papilla, is found on the inside rather than on the outside. It thus bears no similarities with a penis. Except for that semen exits through it just like it does through a penis.

We can see that the reproductive makeup of male chickens makes it rather impossible for them to lay eggs.

Are Male Chickens Necessary for the Production of Eggs?

Once, every 25 to 27 hours, the body of mature female chickens prepares to produce an egg. And this egg will form even if a male chicken doesn’t fertilize it.

However, it is only when the male chicken mates with the female chicken that eggs become fertilized. These eggs when incubated will hatch into chicks.

How do male chickens fertilize eggs?

When a male chicken mates with a hen, the papilla releases sperm into the body of the hen. Once inside, the sperm remains in the hen’s oviduct.

So, anytime a released egg yolk from the ovary makes its way into the oviduct, it joins with the sperm. And presto, fertilization occurs.

Where Do the Stories Emerge From?

You should by now believe without a shadow of a doubt that male chickens can’t lay eggs. But, how do the stories about their purported egg-laying abilities come about?

Sometimes, it’s because a poulterer chances upon his rooster by an egg. This occurrence isn’t uncommon. So, you might occasionally find your rooster standing by an egg when the hen is temporarily unavailable. What’s uncommon is finding your rooster brooding an egg!

Again, where people raise hens that don’t look mature, they question if these hens are capable of laying eggs – even if these eggs are tiny.

But, unless you’re rearing only male chickens, you’re bound to come across eggs in or around your coop. It’s irrelevant whether or not your hens don’t look mature enough.

Hens will usually start laying when they’re about 18 weeks old and above. Still, some can lay when they’re as young as 16 weeks old. It comes down to the breed type, the hen’s diet, sun exposure, and other factors.

Regardless of the supposedly bizarre circumstances surrounding a laid egg, there’s always a plausible explanation for it.

What Are Cocks’ Eggs?

Are eggs laid by male chickens called cocks’ eggs? Not quite. Cocks’ eggs are just another term for fairy eggs or fart eggs.

These eggs are teeny-weeny and are about one-third the size of normal chicken eggs. More like the size of quail eggs.

Cocks’ eggs are an anomaly. They usually contain no yolk. And because of their small sizes, people originally thought they were laid by roosters!

They even believed that if a toad incubated such an egg, it would hatch into an evil creature known as the cockatrice.

The truth, though, is that these eggs are still laid by hens – even if they appear abnormal.

A fart egg comes about when the process of egg formation begins before the hen’s ovary releases a yolk. A hiccup in her reproductive system, if you will. And it’s why you’ll typically find just the white (albumen) in such eggs. Never the yolk.

Mostly, it’s pullets that lay these sorts of eggs. It’s usually at the beginning of their egg-laying journeys. And at a time when their bodies are still getting to grips with the process of laying eggs.

What Use Are Male Chickens if They Can’t Lay Eggs?

In the egg-production business, most breeders consider male chickens surplus to requirements. Every year, more than 7 billion male chicks are killed. In the United States alone, the number is about 300 million!

Once the eggs hatch and the chicks are sexed, the males are sent away to meet their doom. And it takes just a day after their arrival on earth!

But, why this madness? It’s because male chickens don’t lay eggs! What’s more, males of egg-laying breeds will not cut it as broilers. So, they can’t be used for meat production either.

Roosters play an important role within the flock. They’re dutiful time-keepers. They’re trustworthy watchmen and alarm sounders, keeping danger at bay. Especially, if your chickens are free-range chickens. And, they’re excellent at keeping the peace within the flock.

More importantly, the fertilization of eggs can’t ever occur without a rooster. Many people, though, consider roosters a nuisance because of their aggression and noisy crows. And you’ll be better off without them if you just want eggs.

What About the Male Chicken That Laid Eggs?

It may sound ludicrous. But, do you know that in 1474, the people of Basel, Switzerland, tried and sentenced a ‘rooster‘ to death for laying eggs? You read that right.

A public defender was provided for the chicken. He lost the case nonetheless. And the poor chicken was ultimately burned at stake.

This was way back in the 15th century when Europeans were highly superstitious. They based most of their understanding of what happened around them on folklore and Church doctrine.

At the time, they believed that the chicken was the devil’s spawn and had to be executed, lest great calamity befell the city.

It took more than 400 years for science to come up with a reasonable explanation for the phenomenon of roosters laying eggs. In 1922, a brown leghorn bearing the physical traits of a hen but covered in the plumage of a rooster laid eggs in Wisconsin.

Science uncovered that this ‘rooster‘ was a hen suffering from a hormonal imbalance. More importantly, diseases affecting the ovary cause such hens to look and behave like roosters. Too little, too late for our ‘rooster‘ charged with witchcraft in 1474.

So, can male chickens lay eggs? Your guess is as good as mine. Nothing, they say, is impossible. But, even in a world where miracles happen, it’d be easier for a camel to pass through the eye of a needle than male chickens to lay eggs.

If your goal is to produce eggs – and nothing more – you don’t need male chickens. Your hens will give you eggs regardless.

If your goal is to ensure the continuity of your flock, then you might need one or two male chickens. They’re the only way to get your hens’ eggs into chicks.

In the end, it all comes down to what your needs and preferences are.